“There are lots of pigs in my movies. Perhaps  because it is easier to draw a pig than camel or giraffe…But pig is very similar to a human in terms of behavior  and the looks”, says Hayao Miyatzaki, Japanese producer, animator who is also  the the founder of Gibli studio.

Is this a joke? Not at all!

Scientists have decoded  pigs’ genome and discovered that pig is the closest animal related to human on this planet. We have a lot of physiological similarities and need for similar nutrients.

Pigs are one of the smartest animals with  high level of intellect.

Scientists from Emory University (United  States) have proven that pigs are smarter than dog and  can solve tasks just as good as chimpanzees.

Dozens of studies speak about high cognitive abilities of these animals – they posses long term memory, can navigate their way very well in mazes and can successfully accomplish tasks which include moving and correct placement of objects: they can control joystick, move cursor on computer  screen, use mirror to find hidden food which is a complicated task because mirror distorts space

Pigs are not only smart – they can also feel and show compassion, as they also have hearts.

They can express anxiety and empathy when others are in trouble. This is how their expression is described in the scientific studies of Lori Marino, The Kimmela Center for Animal Advocacy. As well as Christina M Covin from Georgia Technological Institute.
Writer and Naturalist Sy Montgomery in her book “The Good Good Pig:  The Extraordinary Life of Christopher Hogwood” has described multifaceted path of emotional and intellectual knowledge  of the piglet from his infancy to his death at 14 yo. Piglet lived in the shed next to her house and was named after famous composter and musician. Petting his belly and special delicate food made Christopher exited, he expressed it by special sound “uuunnn” and took a relaxed pose on his back to express his emotions. 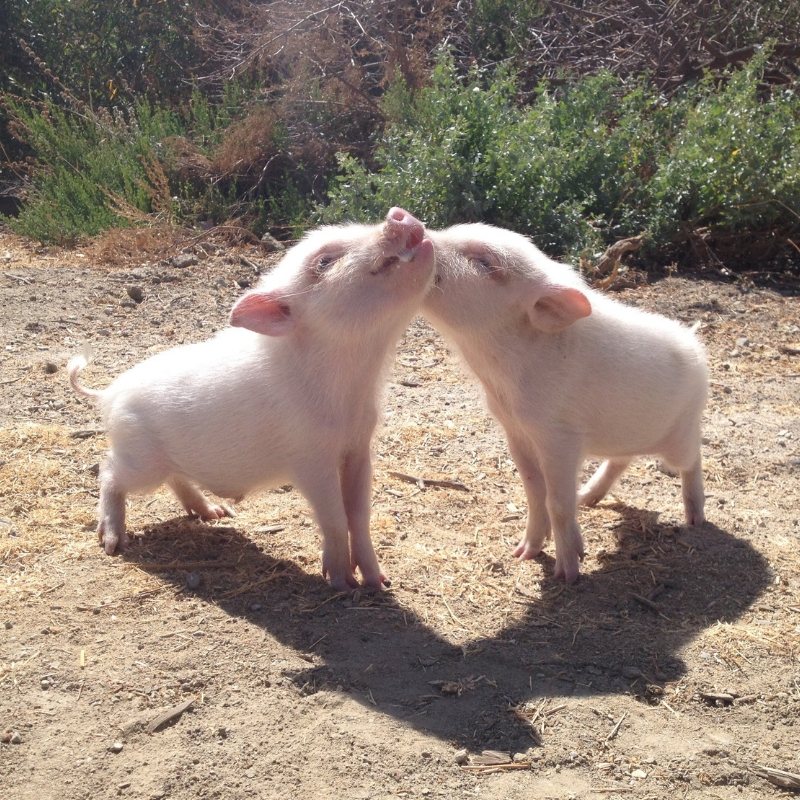 Pigs have acute hearing and subtle sense of smell which compensate their weak sight.

They are taught to find truffles and very often are used instead of dogs to find drugs or smuggling. But there is one problem – pigs keep their personal affections and can totally reject working with a different person – partner.

When piglet is left alone – their piggy change, becomes more nervous and miserable. Animals have their own language – pigs make different sounds in different conditions. In the moment of danger instead of piggy sounds they start screeching, pigs produce sounds similar to barking when they threaten their opponent or being aggressive. They bravely come to rescue their friends – like this pig protecting his friend in the slaughter house.

Its possible that pig might save your life too. Pigs saved drawned people, saved people from burning houses and from the heart attacks. Perhaps this is why from all the 12 animals of the horoscope, pig was the last who came to Chinese Emperor’s  reception – was probably saving someone’s life.

In critical situation you would  not want the pig to turn its smart head different direction.

An old myth about pigs being dirty was probably created by peope who kept their pigs in tiny small spaces. Pigs don’t have functional seat glands and they have to roll in dirt with high clay content  to cool down. Clay also keeps comfortable body temperature longer and protects pig’s skin from parasites. mosquitoes and ticks. Its possible if pigs had more possibilities, they would have used different ways to cool their body.

Pigs are cleanest animals, just like all other animals they are trying to create comfortable conditions for themselves.

Pigs prefer clean food. During one experiment wild boars were given pieces of apples covered in sand. Before eating animals cleaned pieces in water. Then immediately consumed the  cleaned pieces. 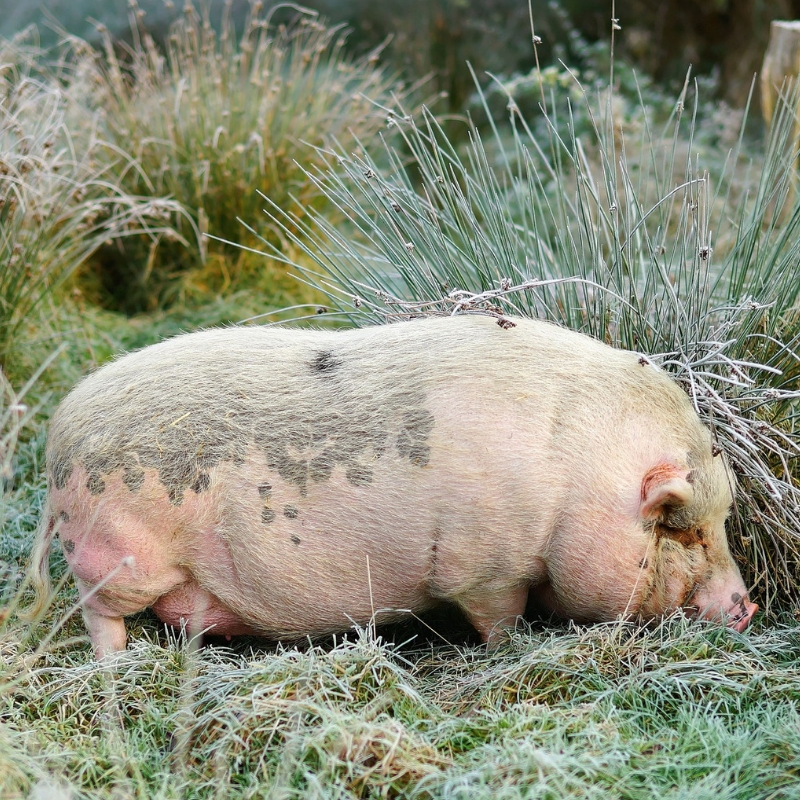 In Chinese culture pigs symbolize prosperity and luck. Not by chance. Chinese character for HOME is made from 2 parts – roof and pig, or pig under a roof.

Wishing you a pig in the house in the new Chinese year – happiness and luck.

Let this kind, smart, happy and emotional pig creater live happy and free in our shared home on planet Earth. We are so much alike. 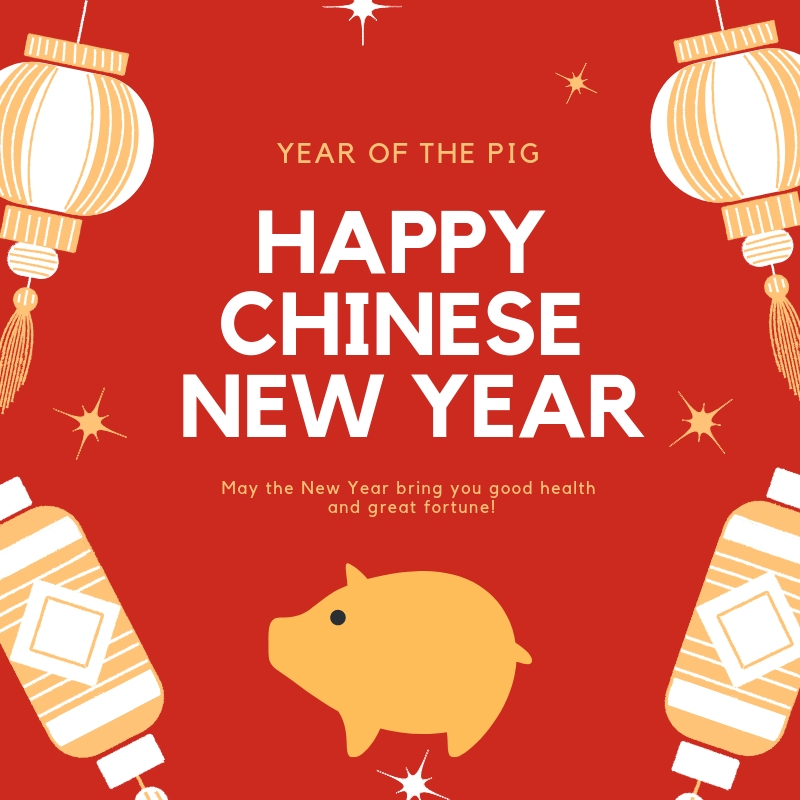 To celebrate happy and  abundant  Chinese New Year I brought classic recipe from my trip to China – vegetable dumping recipe.

There is no need to eat pigs. In modern agricultiure piglets are raised for the slaughter weight of 220 pounds (100 kg) at 6-8 months old. Calculated to human years this will be equivalent to 2-3 yo children (pigs live 15-2- years). Turns out if someone is eating animals – they are really eating animal babies. 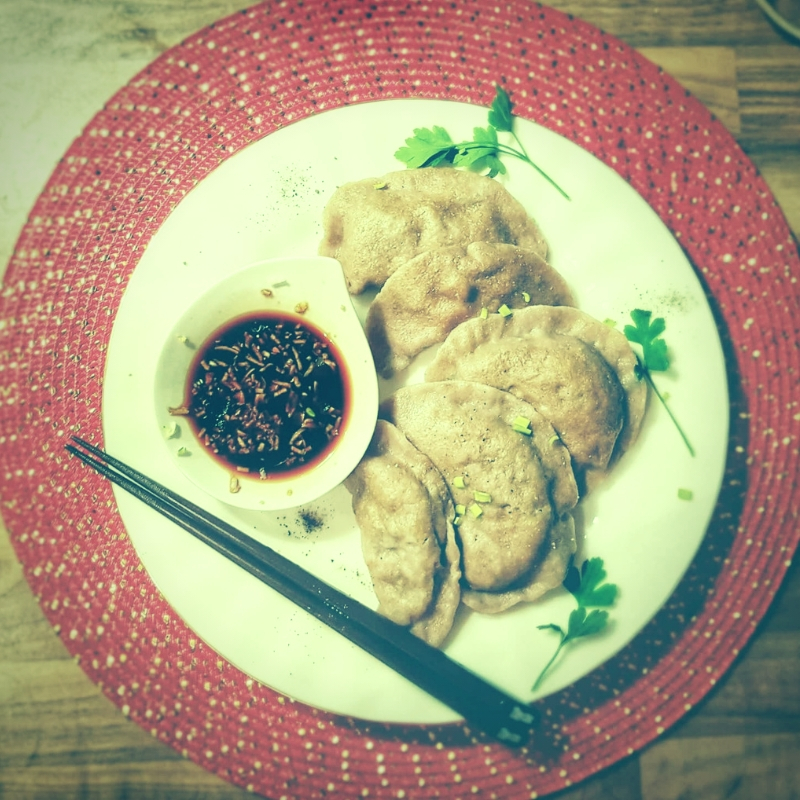 In classic  Chinese recipes proportion and amount of ingredients are eyeballed.