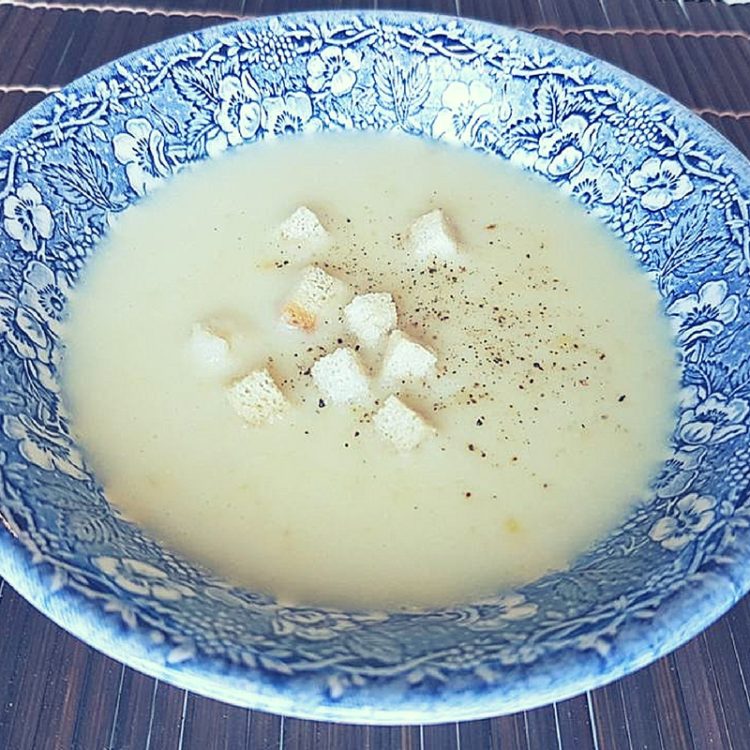 In its vegan green evolution, Bratislava is not far behind Vienna and Prague.

This is the best gift for my birthday, as I bought a ticket for Mozart’s “Cossi fan tutte” to be performed on the historical stage of the Slovak National Theater.

Vienna and Bratislava are like 2 sisters, 2 capitals located so close to each other at just a cat’s jump (of 80 km).

Until 1936 there was a tram running between  Vienna  and Bratislava. In the 18th century, Bratislava and Vienna were connected by a network of underground tunnels. For several centuries Bratislava functioned as the capital of the Kingdom of Hungary, the Austrian rulers Habsburgs were coronated in Bratislava in the cathedral of St. Martin.

Now it is easy to reach Bratislava in 45 minutes by train, or by bus. In summer, there is a comfortable ship line connecting twin cities via Danube, so you can enjoy the nature beauty of the river and cool down during the ride.

My best assistant platform to plan a trip is an online resource HappyCow, which will find vegan places all around the world.

Oooo, it is just jam to my soul: there are several new 100% vegan cafe appeared right in the center of Bratislava during last couple of years. Not all of them open over the weekend, however, I visited 2 of them.

The Vegan Bistro Made with Laf is located in the old town of Bratislava, a 5 minutes walk from the “historical center” and 10 minutes from the Promenade along the Danube embankment.

I liked this part of the city a lot. It is quiet and green, the flow of tourists bypasses this district. There are majestic Altbaus of the late 19th – early 20th centuries, the close relatives of the elegant buildings of this era n Vienna and Berlin. You can also discover hidden architectural gems from earlier times. Modern original buildings are also organically built into the historical canvas. 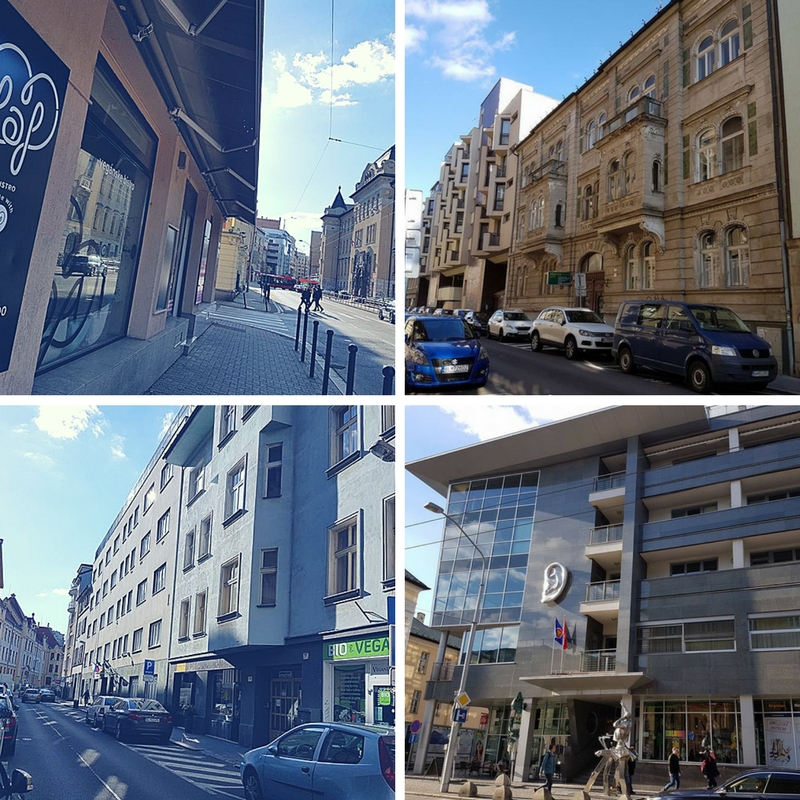 The cozy cafe enjoys a simple design. A young, tall and serious barman is greeting me. The menu is international for every taste with an emphasis on falafel and hummus, wraps and salads. I am attracted to raw cakes, no surprise as I am a birthday girl. My choise is the cafe’s special – poppy seeds raw cake. It is so delicate and melts in the mouth.

And coffee …. We, Vienna citizens, are spoiled by the best coffee in the world which is  the result of the right combination of high quality water, perfect roasting of beans and established for centuries brewing technology. I can confess that coffee in Made with Laf is great!
“Yes, we have very nice water in Bratislava.” – confirms the barman. 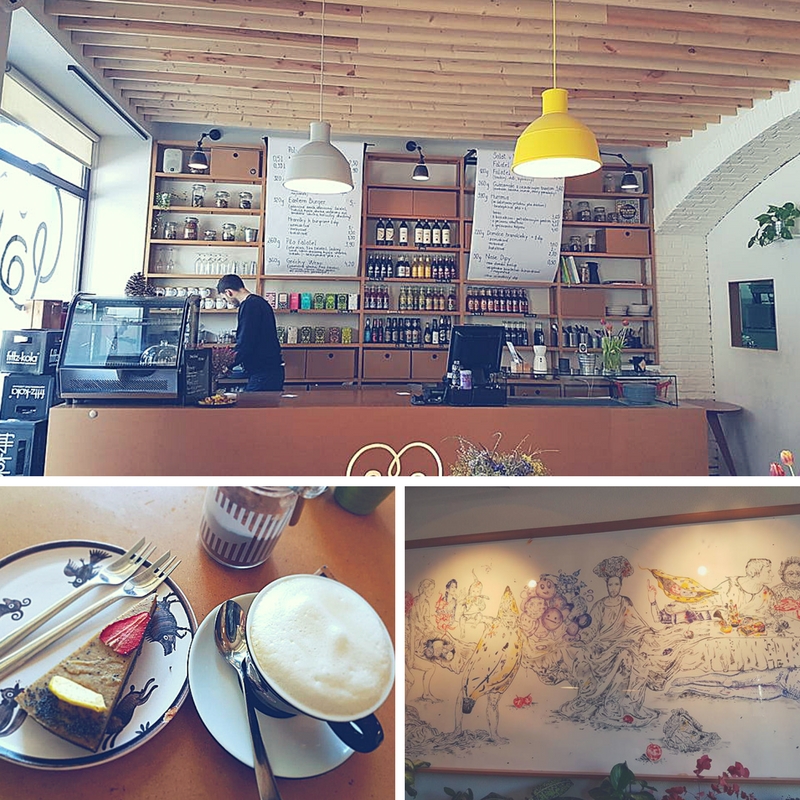 To get a snack before the opera, I run into a vegan kiosk (Vegan Kiosk ) right in the center on Kamennie Namestie ( Stone Square).

The kiosk is in front of a large shopping center. The line is small, and consists of young guys: tall, handsome , with very serious, concentrated faces, the vegan chef looks the same.

The menu, however, is as much extensive as in the bistro: several types of burgers and double burgers, soups, wraps, hot sausage in the dough and even desserts. I take the chef’s recommendation, the V- burger. Chef with fine-trained moves of the master is composing layer by layer, as the painter shapes an image on canvas. “Do you like it hotter ?” He asks without changing the concentration of this face. “I can add our home made chili sauce.” “Yes, yes” – I am nodding in agreement. “The chef generously pours source on the burger.” Oooh – the result exceeds all my expectations. 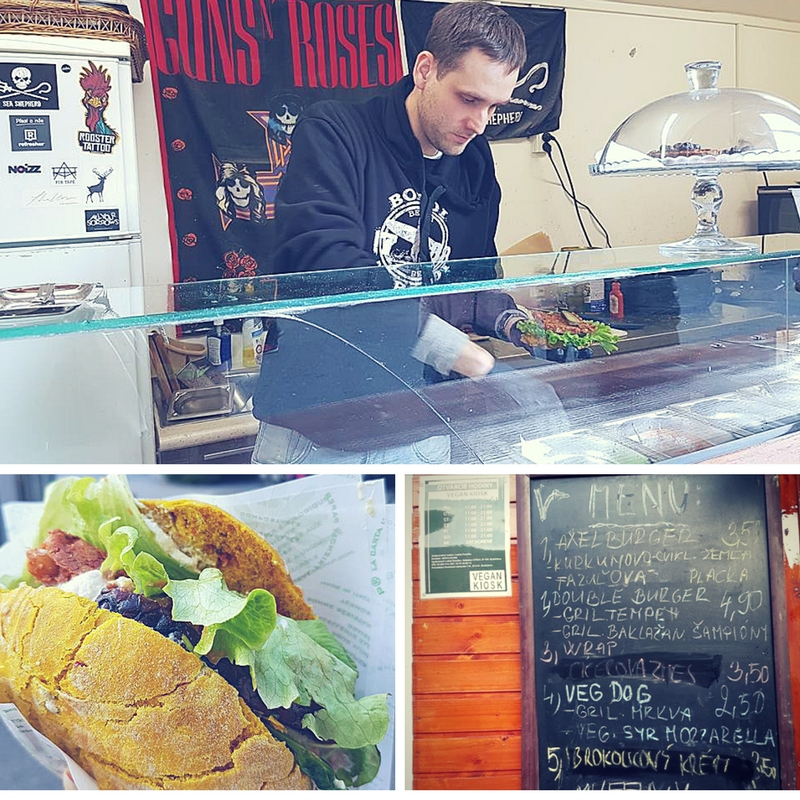 Walking around the city, I discovered a vegan supermarket Bio & Vegan.The store, however, does not work on weekends. Happycow suggested two more options: a second vegan supermarket across Vega Bio (it is open on Saturday till lunch) and Vegan online store Vegshop.sk with delivery in Bratislava.

I definitely give my preference to the Promenade, a modern, fashionable  Danube embankment with a design touch.

The inhabitants of the Slovak capital  love to spend weekends there. We visited the contemprorary shopping center of Euromea at the Promenade. We found there a small organic food store Biopark, where we bought vegan products and local products too. We also got dried fruits in a specialised shop – kiosk and tasted a berry smoothie in a juice bar. By the way, prices in Bratislave are more democratic than in Vienna. 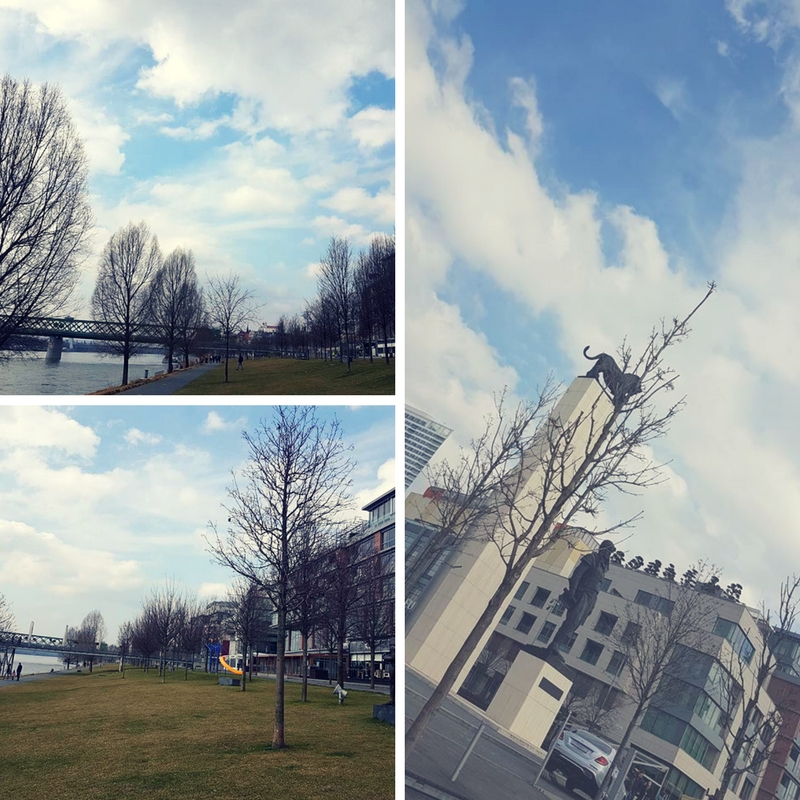 In the summer, when the navigation season opens, I will definitely go with  a boat to go Bratislava again and to check up vegan cafe Balans Bistro and Vegan mini bar Vegan Bar.

Slovak cuisine has adopted the features and customs of the neighbors – Austria, Hungary and the Czech Republic.

For the spring time, I would recommend simple anti-flue garlic soup of Slovak cuisine (which is also popular in the Czech Republic).

In national Slovak restaurants, the soup is often served in a “bread pot”. I like a variation with a baked garlic. 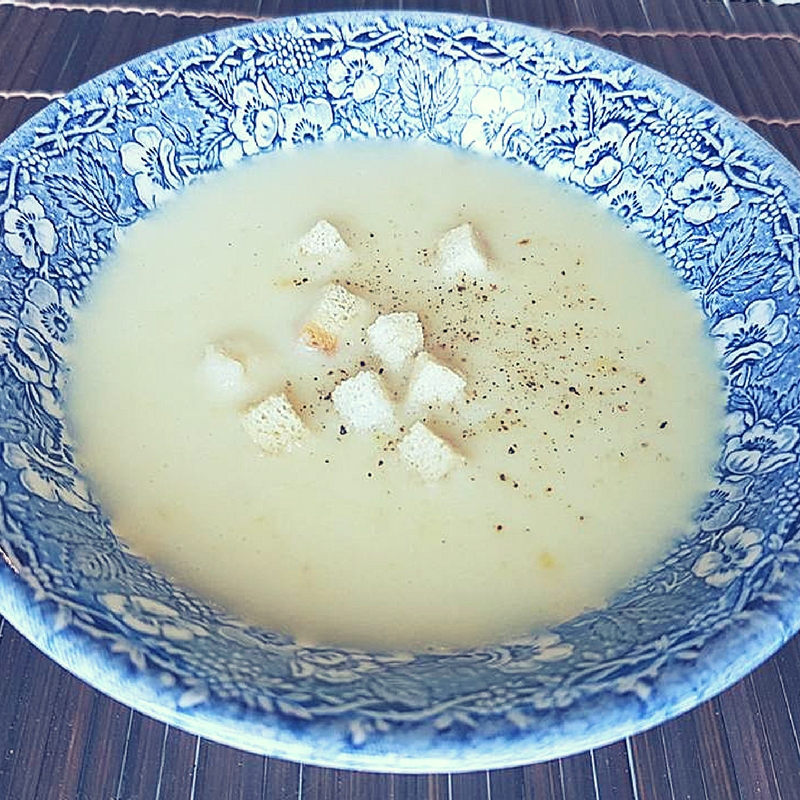